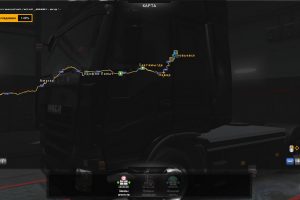 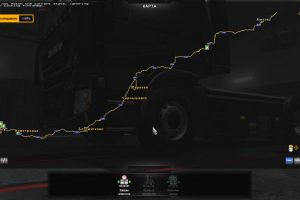 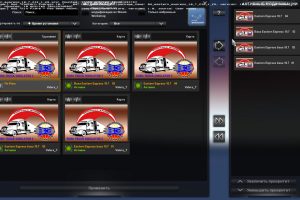 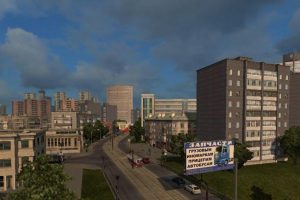 – 263 cities and towns
– Working weight stations
– Plato working system (toll roads)
– Large base-garage in Samara with the base of the company Eastern Express” and in Krasnoyarsk “Sovtransavto”
– All companies in Europe and the CIS have a real analog
– Companies in the CIS are completely new and are not analogues of standard companies
– Passenger transportation is carried out by buses between bus stations, and in the CIS also between airports, construction sites, seaports
– It is possible to transport goods on BDF trucks (invisible cargo), as well as on trailers-tandems
– New cargo is carried only in CIS countries
– New trailers with logos of Russian companies
– In the last added cities, such as Omsk and Novosibirsk, there are animated gates on the bases
– To work the map you need DLC “Going East!”, “Scandinavia” and “Vive la France!”
– It is possible to connect a stand-alone CIS module, without Europe
– Not compatible with other mods and maps, except those specially adapted for it

Transportation on the map:
– Standard trucks are not replaced – buses, as well as trucks for the card, are bought at their car show
– Are purchased in the salons: in Samara, Ufa, Dnepropetrovsk, Kiev, Kharkov, Uzhgorod, Lviv, Brest, Grodno, Novorossiysk, Sochi, Volgograd, Ulyanovsk, Yekaterinburg, Chelyabinsk, Novosibirsk, Omsk, Krasnoyarsk and Irkutsk

Features of passenger transportation:
– It is necessary to disable the advanced simulation of the trailer coupling in the settings
– You should have about 100 000 euros to buy a bus
– For access to passengers, you must purchase a license for ADR 3 (gasoline, diesel fuel, etc.)
– After buying a license you need to buy a bus in one of the car dealerships
– Passengers in the cargo menu will appear for you on the following day, that is, after 0 hours, you can sleep in the garage to come the next day
– You are ready to transport passengers
– Do not buy license number 3 while you are not working on your truck, otherwise you will automatically trap passengers instead of normal trailers

Features of loading and unloading with passengers:
– Landing and disembarkation of passengers is carried out by hitting the frame forward, and not backwards as on a truck
– Passengers are still a trailer, only invisible, so it will be difficult for you to park it backwards and it’s necessary to make a more arc of the arrival when entering the parking lot, so that
at the entrance to the parking lot, the invisible trailer was able to take the position of the bus – then there would be no problems with the landing
– Landing passengers can be carried out and backwards (where there is a possibility), since you do not have a towed trailer and nothing will stop you from parking for loading backwards