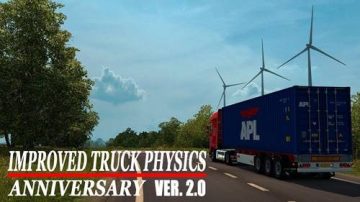 Installation instructions:
1. Extract all files from downloaded rar-archive to some temp folder;
2. Copy BASE.scs to MOD folder;
3. Based on your requirements, copy required truck/tandem/trailer mod files to MOD folder;
4.Open in-game mod manager and enable all copied mods (refer to “correct mod installation” chapter for proper physics mod installation);
3.Play!
“Correct mod installation”
Main mod file (BASE.scs from “Base” folder) can be installed with any priority, but it is always better to install it with top priority, to make sure other mods are not interfere with it.
Mod files for trucks mods, tandems mods and trailers mods (from “Others” folder) must be ALWAYS installed with HIGHER priority, than mods they are suitable/intended for.
-28.09.16 Version 2.0 “anniversary”